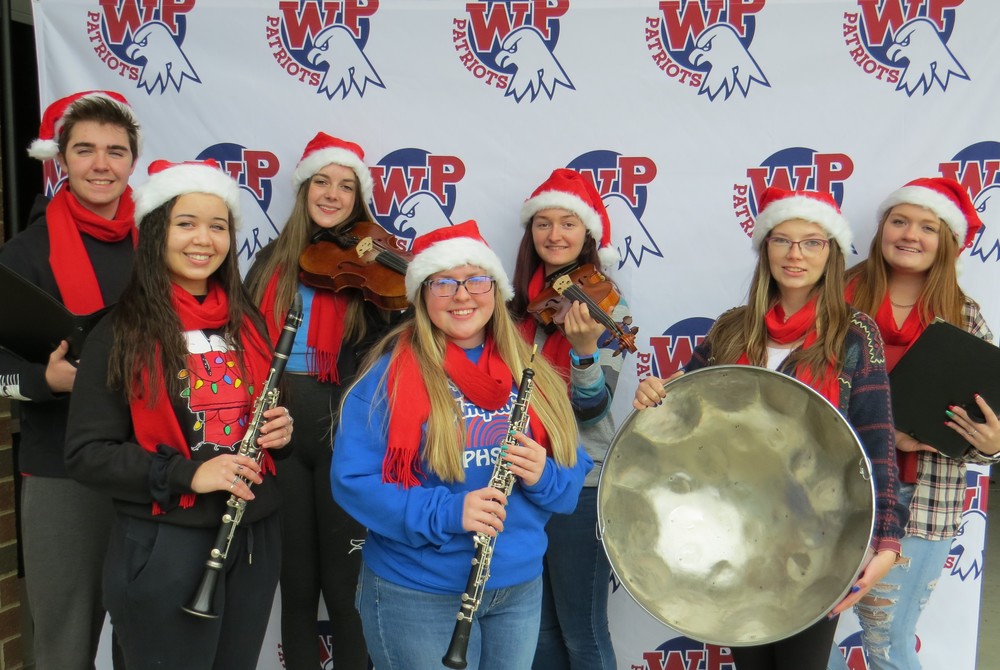 Once again, it is that time of year when the students of Wheeling Park High School are preparing for the 26th anniversary performances of the Festival of Sound holiday concert extravaganza.

This much-anticipated event returns on Friday, December 17, at 7:00 p.m. with additional performances on Saturday, December 18, at 7:00 p.m. and, finally, on Sunday, December 19, at 2:00 p.m., in the J.B. Chambers Performing Arts Center on the campus of Wheeling Park High School. Tickets for the performances are now being sold online at http://wphswv.booktix.com/ and also in the main offices of Wheeling Park High School and Ohio County Schools (at 2203 National Rd. in Elm Grove). Online ticket sales will incur a small convenience fee. In-person ticket sales will occur from 7:30 a.m. to 3:30 p.m. on school days through December 17 while online ticket sales will continue (if available) up until each show time. Tickets are $12.00 for adults and $7.00 for students. Seating for each show is limited and is general admission. The availability of tickets for purchase at the door cannot be guaranteed. Doors will open one hour before each show. There is handicap-accessible seating available as well as handicap-accessible parking with dropoff in front of the center. Parking for the general public may overflow to the school’s rear parking lot where patrons will have the option to follow signs as they walk through the building or ride a shuttle bus around to the front entrance of the center.

The Festival of Sound (FoS) is the premier holiday show throughout the region and boasts a variety of the very best music coming from television, Broadway, jazz, sacred, and secular traditions. There will be something for every member of the community to enjoy! The Music Department of Wheeling Park High School is preparing “It’s the Holiday Season,” the 26th Anniversary Festival of Sound, for the public that has supported its performances over the years, and the event continues to be as popular as ever! What is the reason for decades of success? It is simple: the students!

These very talented teens represent a collaborative nature of learning that remains a constant at Wheeling Park High School. Many of the FoS performers are also active in competitive sports, theater, speech and debate, student government, clubs, career/technical studies, and a wide variety of their own music ensembles outside the school day. This environment at Wheeling Park isn’t just in the Music Department but incorporates teachers, coaches, office staff, and administration throughout the school! It is an approach that is even older than the Festival of Sound, itself.

“We have something special here that gets its start in the earlier grades. Our middle schools are the grounds for developing student leadership and collaboration. At the high school level, it is all about supporting the students in that endeavor,” said David Alfred, Director of Bands. He adds, “We also cannot overlook the importance of a good music education particularly in the primary grades. That is what ensures success years down the road. In this regard, FoS really is a celebration of music education throughout all of Ohio County Schools.” According to Choir Director Joyce Jingle, "Festival of Sound is going to be a new experience for half of our students who have not had a typical school year. Last year was the first time in more than two and a half decades that Festival of Sound did not happen. We are eager to get back to our tradition and make some great holiday music together."

Choir Director Christie Curley thinks that some of the fun of FoS will be just watching students transition from one ensemble to another as the performance progresses. “We literally have students in 4 or 5 different performance groups. That’s a tremendous level of commitment and musicianship!” Ensembles performing during the 2021 Festival of Sound include the Concert Band, Jazz Ensemble, Symphonic Winds, and Steel Drum Band. The Red and Blue Orchestras along with the Concert Choir, Young Patriots, Voices of Freedom, Men’s and Women’s Ensembles will also appear during the show. Highlights of the performance are bound to include those selections that incorporate all 350 musicians in what is called the Patriot Ensemble. It is a sight to behold and a joy to hear! In yet another collaborative endeavor, the award-winning WPHS Speech Team members will serve as Masters of Ceremony! The collaborative nature of these music students is the focus of the Festival of Sound shows.

Orchestra Director Ben Podolski states, “We teach so much more than music and the students teach us as well,” and it shows since FoS seems to get better each year if that’s even possible! It is important to note that the event does not come off without community and administrative support, and a host of parent and alumni volunteers handing out programs, supervising backstage, coordinating ticket sales, and ushering. “There is just no way that we could do a professional-level concert like this without all of the efforts our administrators and volunteers are putting in behind the scenes,” explains Curley. The show is housed in the J.B. Chambers Performing Arts Center, a state-of-the-art, 1,200-seat, performance theater on the campus of Wheeling Park High School that is just now celebrating the end of its 10th year! The venue features dress-circle seating, a mezzanine and two galleries. An elevator is available as well as restroom facilities on every floor. Music Directors of the Festival of Sound are David Alfred, Seth Bell, Christie Curley, Joyce Jingle, and Benjamin Podolski. For more information call Wheeling Park High School at 304 243 0400.