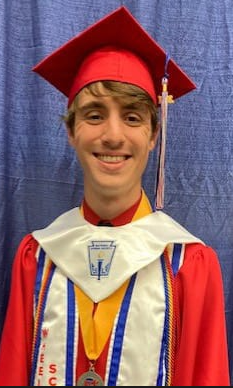 Ryan Quickel was named as the Patrick Latos Memorial Scholarship winner at the Wheeling Park High School Class of 2021 Commencement held June 6 at WesBanco Arena. The Latos Scholarship is awarded each year to a Patriot senior to help them further their music education. The scholarship was established in 1999 as a memorial to Patrick Latos who had been a member of the Ohio County Strings Program throughout his years at Wheeling Park High School.

Quickel, the son of Steve and Kara Quickel, played viola as a Patriot strings student in each of his four years of high school. He said he was proud to win the $10,000 Latos scholarship, but he did not believe winning it was a sure thing.

“There was an element of surprise there,” Quickel said. “I was confident because I was so active (in Wheeling Park music programs), but there were so many students who applied. And, the ones who applied were just as qualified and just as deserving as I am.”

Quickel began playing viola in the fifth grade. He was inspired to play the instrument by his sister, Kristen, who also spent four years in the Wheeling Park High School Strings Department. Since first learning to play viola, his love for the instrument has not wavered or waned.

“My sister played, and I knew she could show me the ropes,” Quickel said. “I think what I enjoy most about viola is that it is the instrument I started on, and it made me fall in love with music from the beginning. I rediscover that passion every time I pick up the instrument.”

Quickel said he loved his time performing in various ensembles at Wheeling Park High School. He said the educators in the Patriot music departments are exceptional, and the students learning from them are well aware that they are being taught by excellent teachers. Quickel also said he loved the four years he spent learning from Park strings teacher Ben Podolski.

“Mr. Podolski was the teacher who had the most impact on me,” he said. “He taught me so much about music and life. It’s hard not to feel like he’s one of your friends.

“I love strings, but the entire music department at Park is filled with amazing faculty,” Quickel added. “That’s why the Wheeling Park Music Department is so successful. I was also in band and choir, so there’s a family feel to it. The students all feel connected through these big concerts like ‘Festival of Sound.’ The Wheeling Park Music Department changed my life and my high school career, and it has inspired so many students to pursue music as a career.”

Quickel will soon be a student at West Virginia University where he will be a music industry major. He plans to minor in interactive design for media. Quickel said he plans take what he learns at WVU and apply it to a career in the music industry.

“I chose WVU because it is a great, affordable option with a wonderful and diverse music program and a world-renowned faculty,” Quickel said. “I definitely want to do something in music. I want to be involved in production and the use of technology. My hope is that I can learn skills to present music in a practical and employable way in the entertainment industry.”