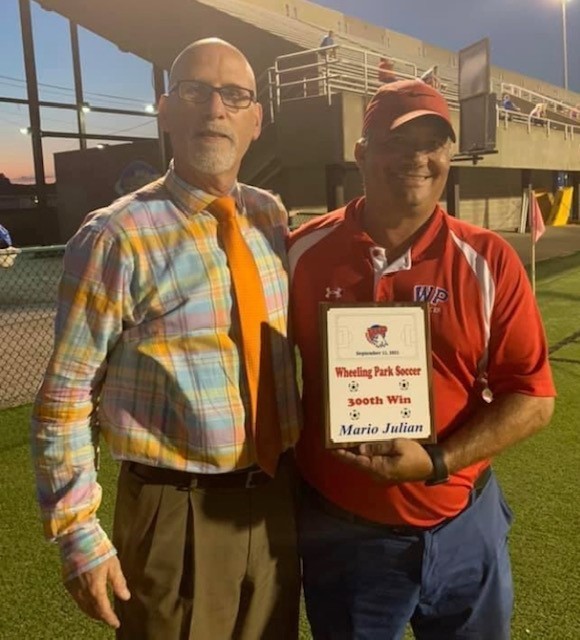 Julian earned his 300th coaching victory on Sept. 11 when the Patriots claimed a 3-1 victory on the road over Hedgesville. On Sept. 14, Wheeling Park Athletic Director Dwaine Rodgers presented Julian with a plaque in recognition of his 300th coaching victory prior to Park’s 2-1 victory over Steubenville at Wheeling Island Stadium. With Patriot’s 10-0 home win last night over John Marshall, Julian has now compiled a record of 302-131-59 over the course of his 21-year tenure.

Julian was humble when discussing his 300th victory and the success he’s had in his two decades as Wheeling Park’s head coach. He credited Wheeling Park’s talented and dedicated student athletes for the achievements of his teams.

“It was a big win, and sharing it with this team was special,” Julian said. “I never thought I would be coaching this long, let alone achieve 300 wins, but I’m still here because of the players. I’ve met a lot of great students and parents along the way. I’ve had so many really good players, and a lot of them have reached out and congratulated me. Being a part of the program for this long and sharing it with the previous players has been great.”

Rodgers said he was excited for Julian to earn his 300th victory, and Wheeling Park High School is proud of the success the Patriot boys soccer team has enjoyed under his leadership.

“He’s been here 21 years, and that continuity pays off,” Rodgers said. “We’re very happy for him and for what he’s achieved. He works very hard with his student athletes, and it shows when they compete.”