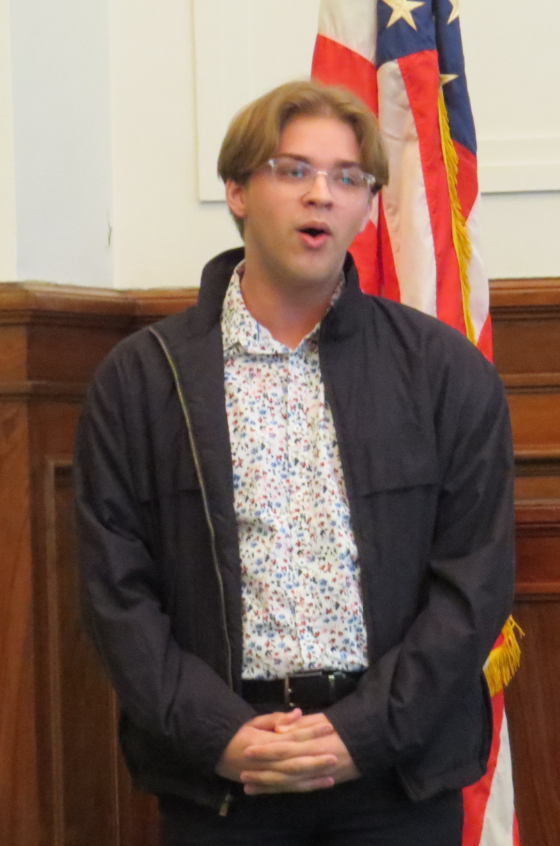 Patriot senior Braden Mills sang “God Bless America” and “America the Beautiful” on Nov. 12 to close a Naturalization Ceremony in United States District Court for the Northern District of West Virginia following an invitation from the office of U.S. Magistrate James P. Mazzone. Mills is a member of Wheeling Park’s Young Patriots choir as a featured soloist, and he is also a featured soloist for the Wheeling Symphony Orchestra.

Mills sang before the 10 new U.S. citizens originally from Pakistan, Iraq, the Phillipines, Thailand, Nepal, Costa Rica France and Mexico, their families and court staff. He said he didn’t know what to expect prior to the event, but he enjoyed the ceremony and the performance.

“It was a cool experience,” Mills said. “It was very celebratory.”

Mills has been selected for All-State choir in each of his four years at Wheeling Park, and he earned a solo each year. He was also was accepted into The Governors School of Arts. Mills said he has been singing as long as he can remember, but his 2019 performance at Festival of Sound led to him performing with the Wheeling Symphony Orchestra. He noted that he believes people will truly enjoy this year’s Festival of Sound, which will be held Dec. 17-19 at the J.B. Chambers Performing Arts Center.

“I’ve been singing my whole life, but it really began in fourth-grade choir (at Steenrod Elementary School),” Mills said. “My solo my sophomore year (at Festival of Sound) was really helpful in terms of exposure, and I think that is how I was noticed (by the Wheeling Symphony Orchestra).

“I’m really looking forward to Festival of Sound,” he added. “It’s been very busy, but there are a lot of great songs this year.”