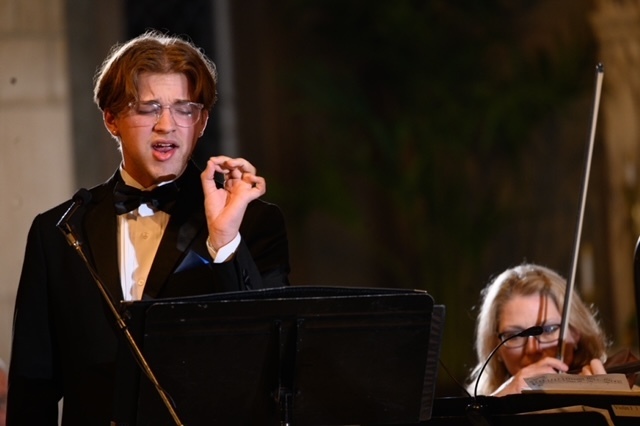 Wheeling Symphony/Young Patriots Performance to be Shown on WTRF7

Wheeling Symphony Orchestra’s “A Not So Silent Night” Holiday Concert to be Broadcast on WTRF-CBS and WTRF.COM

(Wheeling, WV) Wheeling Symphony Orchestra (WSO) announces A Not-So-Silent Night with the WSO. The concert, conducted by John Devlin, will feature guest mezzo-soprano Sasha Cooke and the Wheeling Park High School Young Patriot Choir. The holiday performance will air on Thursday, December 16 at 7:00 pm on WTRF-CBS and on WTRF.com.

Join the Wheeling Symphony Orchestra and Maestro John Devlin from the comfort of your home for “A Not-So-Silent Night with the WSO.” This one-hour holiday concert will feature two-time Grammy award winning mezzo soprano Sasha Cooke, the Wheeling Park Young Patriot Choir and the world premiere of composer Quinn Mason’s “Christmas Eve Festivities.” Don’t miss this magical holiday celebration from the Cathedral of St. Joseph airing on WTRF-CBS.

“The Wheeling Symphony Orchestra is happy to once again bring A Not So Silent Night into the homes of people all over the Ohio Valley and beyond,” says music director John Devlin. “The program will be a mix of holiday favorites, reimagined carols and the world premiere of Christmas Eve Festivities by Quinn Mason.”

Mason, a Dallas, Texas- based composer notes that, “Christmas Eve Festivities is a short and charming picture of festive activities that occur before the Christmas holiday including sleigh rides, tree decorating and Christmas carols.”

Quinn Mason’s music has been played by orchestras such as the Dallas Symphony, San Francisco Symphony, Utah Symphony, West Virginia Symphony, Toledo Symphony, Orchestra Sinfonica Nazionale della RAI, National Orchestral Institute Philharmonic, National Youth Orchestra of the United States and many more. A multiple prize winner in composition, he is also the recipient of awards from the American Composers forum, Philadelphia Youth Orchestra, Heartland Symphony Orchestra, ASCAP, and Voices of Change among others. He is also a conductor, having studied with Marin Alsop, James Ross, Miguel Harth-Bedoya and Will White, and has guest conducted orchestras around the country.

Maestro John Devlin also remarked on his collaboration with Mezzo soprano Sasha Cooke. “I look forward to introducing the incredibly talented Sasha Cooke to the wider WSO audience. Sasha appeared on the WSO’s SoundBites concert in November to the sheer delight of those who were lucky enough to attend the sold-out performance. The great thing about A Not So Silent Night is that everyone can enjoy!”

Two-time Grammy Award-winning Mezzo-soprano Sasha Cooke has been called a “luminous standout” (New York Times) and “equal parts poise, radiance and elegant directness” (Opera News). Ms. Cooke is sought after by the world’s leading orchestras, opera companies, and chamber music ensembles for her versatile repertoire and commitment to new music. Ms. Cooke has performed with opera companies worldwide, including the Metropolitan Opera, Opera National de Bordeaux, Los Angeles Opera and many more. During her career, she has been engaged by more than 70 orchestras including the Los Angeles Philharmonic, Philadelphia Orchestra, Boston Symphony Orchestra and the London Symphony Orchestra.

The Wheeling Park High School Young Patriot Choir will also perform on the concert, including a solo appearance by talented senior Braden Mills. Choir Director, Joyce Jingle, was instrumental in preparing her students to perform alongside the professional musicians of the WSO. Wheeling Park students said they were thrilled to take part in the performance with the Wheeling Symphony Orchestra.

“I had the honor of meeting some of the members of the orchestra and seeing how passionate the members are for their craft is inspiring,” said Patriot sophomore Ryan Linder. “I appreciate the opportunity the Wheeling Symphony has given us to work with such a talented group of individuals.”

In 2020, the WSO created A Not So Silent Night in response to the restrictions on live music occasioned by the COVID-19 pandemic. “The feedback from the concert was so positive, we decided to do it again,” says WSO Executive Director Bryan Braunlich. “Staging both the holiday concert and Symphony on Ice in the same month is a lot of work, but well worth the effort. Community support for the orchestra is at an all-time high, and we are grateful to be part of the Ohio Valley’s holiday traditions.”

A Not So Silent Night is supported by guest artist sponsor Panhandle Cleaning & Restoration, Encova Foundation and Ohio Valley Wellness Coalition with additional support from the EQT Foundation. Media sponsorship by WTRF. More information is available at wheelingsymphony.com.