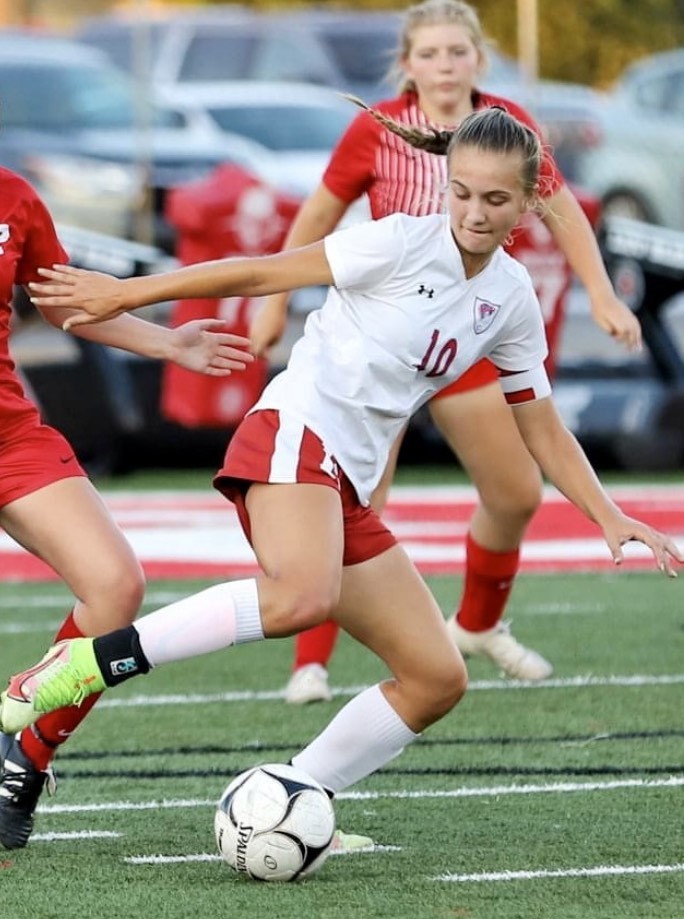 Delk said she was proud to be named by writers as the Mountain State’s top player following a 20-win season for the team that ended in a heartbreaking 2-1 loss to George Washington in the WVSSAC Class AAA State Championship. Delk, a forward for Park, put up stellar numbers for the Patriots during the 2021 season including a school record 46 goals and 20 assists following a freshman campaign in which she scored an impressive 28 goals.

“I really appreciate it because there were a lot of athletes that could have gotten it,” Delk said. “I was surprised, but I was definitely happy and grateful. I’m also grateful for my teammates and coaches because I’m surrounded by great ones.”

Wheeling Park High School girls soccer coach Carrie Hanna said she is proud of Delk for earning such a distinction. Hanna said it is a recognition that Delk earned through hard work, dedication and leadership.

“Merritt Delk is incredibly deserving of this honor,” Hanna said. “She is an exceptional soccer player. Merritt is a competitor who leads her team to victories by scoring and creating goals every game no matter the situation or conditions.”

Delk said she and her teammates were upset over the state championship loss. However, she has big expectations for the Wheeling Park girls soccer team in the next two years.

“I’d really like to be back-to-back state champions,” Delk said. “We were definitely disappointed we didn’t win, but I think it has made us hungry to go out and win it the next time.”

Delk is also a member of Wheeling Park’s girls basketball and track teams. She is an excellent student with a 4.875 GPA, and her favorite classes are math and science. She named Wheeling Park anatomy teacher Kevin Orth as one of her favorite teachers. She said she enjoys being a student at Park.

“I like the atmosphere, I like my classmates, and I feel like the teachers want to help,” Delk said. “I enjoy seeing the remodeling that’s being done and the new things that are happening.”

Delk said she plans to play soccer in college, but she hasn’t yet decided where she will attend. She plans to pursue a degree in either math or science. Delk will be recognized as the West Virginia Girls Soccer Player of the Year on May 1 at the Victory Awards Dinner in Charleston.