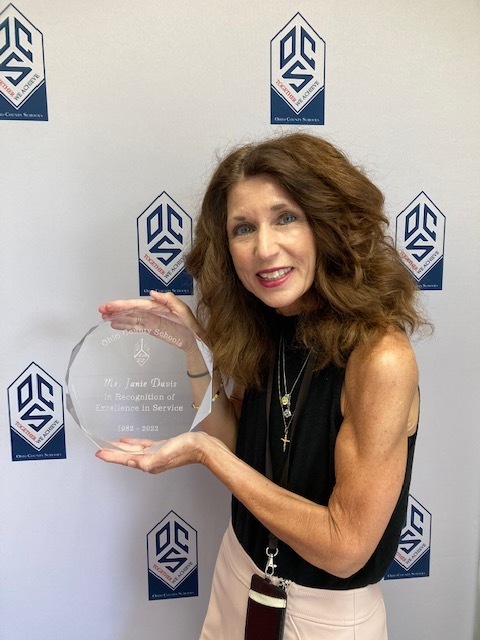 Janie Davis Serves in Her Last Board of Education Meeting

The Ohio County Board of Education recognized Executive Secretary Janie Davis for her 40 years of service to Ohio County Schools at its regular meeting today.

Davis served in her last board of education meeting at which she was presented with a plaque in her honor by Assistant Superintendent Rick Jones. She received an ovation from board members and those in attendance at the meeting. Davis was then interviewed by WTOV9 for a segment that will be broadcast this evening.

Davis was hired in September of 1982 as the Administration Relief/Switchboard Secretary, and she served in  that role for two years.

In 1984, she was named as the Personnel/Human Resources secretary, and she worked in that capacity for the next 22 years.

Davis was named as Executive Secretary to the Superintendent in July of 2006 and served 16 years in the position.

She worked as the secretary for four Ohio County Schools superintendents, and she worked and documented approximately 400 meeting of the Ohio County Board of Education.

Janie has been commended for meticulously writing the board meeting minutes and being a dedicated employee in the Central Office.

Thank you very much, Janie!!!