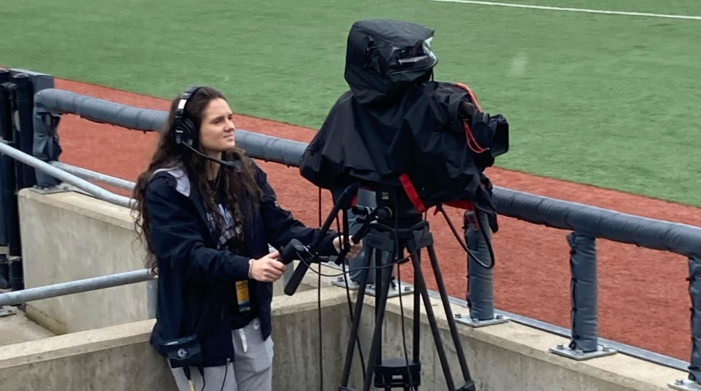 Wheeling Park High School graduate Maggie Stakem is thriving as member of the West Virginia University Video Production Team, and the skills she learned in the Patriot Career and Technical Education Program readied her for her current role.

Stakem graduated from Wheeling Park in 2021. She said she began taking part in Park’s Broadcast Technology program as a freshman, and she quickly became immersed in the many projects it offers.

“I loved it,” Stakem said. “That’s why I chose to be a media major. My brother (Jack) was in the department, so I joined the second semester of my freshman year. It is an excellent program, and I learned so much.”

Stakem is entering her sophomore year at WVU. She joined the WVU video production team as a freshman. The team is guided by WVU Reed College of Media Professor Charles Scatterday, who is also a Wheeling Park graduate. Stakem said she has learned a great deal from Scatterday, and she enjoys working with him.

Stakem and her teammates film Mountaineer football and basketball games that are broadcast on ESPN and ESPN Plus, along with many other events. She said it has been a thrill to cover such high-profile events, and Wheeling Park High School made it possible for her.

“That’s why I got the job,” Stakem said. “I was prepared to go out and do the job in the field. Wheeling Park prepared me, and I have the ability to do many things beyond live (broadcasts). I learned everything from photography to public speaking. They really showed me the ropes and provided me with everything I need to know in terms of media.”

Stakem attended Woodsdale Elementary School and Triadelphia Middle School before she became a Wheeling Park Patriot. She said she believes she received an excellent education.

“I went to public schools my whole life,” Stakem said. “My education was great, and it prepared me perfectly for college. It wasn’t only the academics. The social aspect was great. It prepared me academically and socially for college and the real world.”