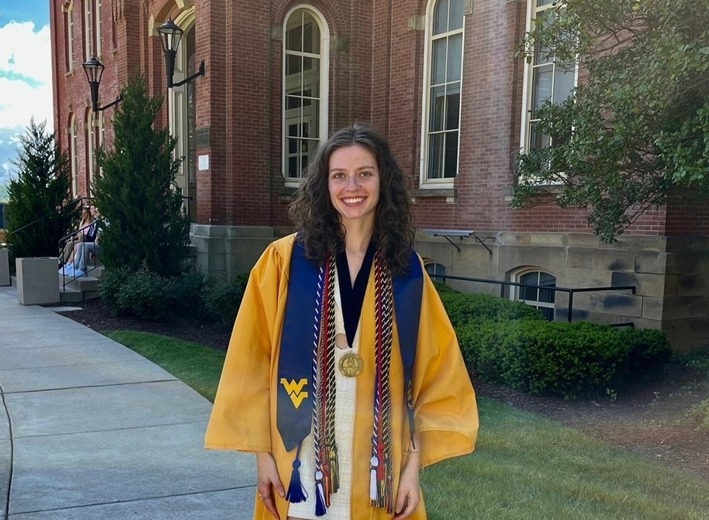 Wheeling Park High School alum Sarah Ihlenfeld earned the highest distinction possible in two majors when she received her diplomas this past May from West Virginia University.

Ihlenfeld said she truly enjoys her current position, but she has not made definitive plans in regard to a specific career. She said she is considering graduate school and law school, but she believes she has established some personal goals.

“I want to be involved in creating a more fair and just economic system in the U.S.,” Ihlenfeld said. “I want to stay in public service and stay involved in economic policy. I feel like I’m doing what I’ve envisioned myself doing, and this job is helping me figure it out.”

Ihlenfeld did everything at Wheeling Park High School. She was an honor student, an athlete and a musician. She graduated with a 5.0 grade-point average, and she was named as a National Merit Scholarship semifinalist. Ihlenfeld loved Park’s  music programs in which she played cello and was a choir member.

Ihlenfeld said the well-rounded education she received at Wheeling Park High School prepared her for WVU. She said being a member of the Patriot Speech and Debate Team benefitted her in college and continues to benefit her in the professional world.

“I was better prepared than a lot of my peers,” Ihlenfeld said. “I’m happy for being a part of the debate team. It really helped me, and I think it will continue to help me in the career that I’m pursuing. Wheeling Park made feel comfortable going into college, and that is super important.”

“I’m grateful for the friendships with classmates and teachers at Park,” Ihlenfeld added. “I made a lot of new friends (at WVU), but I had a solid group that I stayed close with into college. I liked having a group of friends that I grew up with who I knew from when we were kids.”